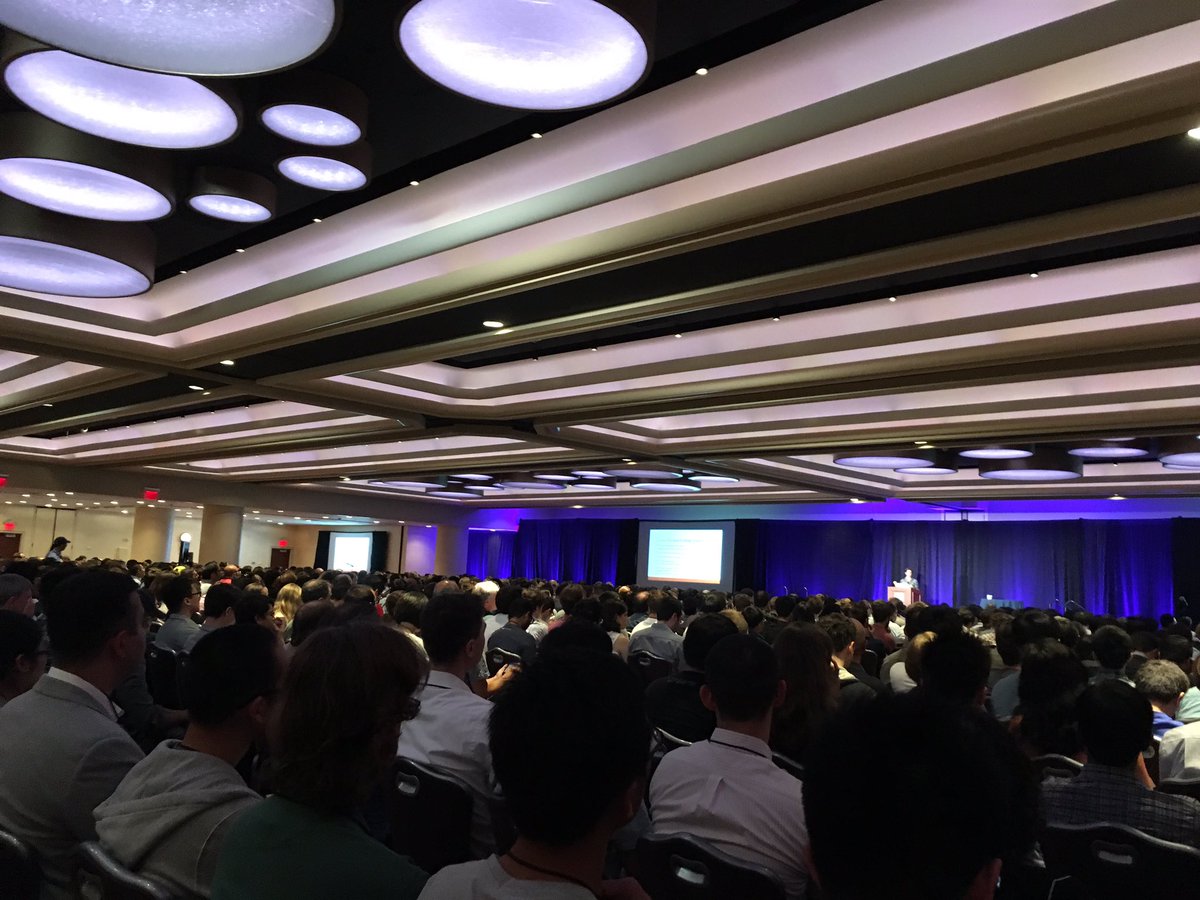 The topic of causal inference was strongly presented this year. The reason for that was, however, unclear — the methodology is the same as it was before and no major breakthroughs were reported to justify the popularity of the topic. To me, the only plausible explanation is that the problem of causality started to matter to a larger group of people.

Tools of the trade

Intelligent Conversational Agents
The ultimate goal is to build an intelligent conversational agent. Supposedly ML end-to-end system is the way to achieve that. The most promising method at the moment is a memory network:

bAbi tasks is just a first step, eventually a good model has to work on a real data as well. LSTM with attention can remember for a somewhat longer time. The talk followed closely the MemNN paper and felt somewhat outdated.

Differential privacy framework for holdout
Makes more effective use of the data by allowing to reuse the holdout set. Provides statistical guarantees that we are allowed to do that without overfitting. Let’s take the usual case when you need to evaluate a model on the holdout set. The idea here is to have a wrapper function, that will decide whether we really need to evaluate the model on the holdout set, or we can do that on the training set and still have a truthful estimate. The wrapper function \(\text{Thresholdout}()\) will run the model \(q()\) on the training set and on the holdout set to estimate, say, accuracy, but it will not report the result to us right away — if the statistics of the \(q(X_\text{training})\) are same as the statistics of the \(q(X_\text{holdout})\) up to a \(\epsilon\) then the method will report the accuracy estimated on the training set. And only in the special case when the statistics are different it will use the holdout set with some noise added to the estimate. See the code snippet. [Slides]

Tutorial: Recent Advances in Non-Convex Optimization and its Implications to Learning (by Anima Anandkumar) Escaping local optima
After you’ve dealt with saddle points you are faced with the problem of local optima. Spectral optimization. Matrix eigenanalysis provides solutions where eigenvectors are the critical points. We can extend that method to tensors, but it becomes a lot harder — there are exponentially more eigenvectors \(e^d\) and thus exponentially more saddle points. You can use tensor decomposition instead of maximal likelihood for unsupervised learning tasks, which supposedly has better error surface. Perturbation analysis — how adding noise to tensors affects eigenvalues computation? This is explored for 2D matrices, but not so much for moreD ones. Has applications like 3D Latent Dirichlet Analysis to look at triples of words.

A very soft presentation about the use of causal inference. One interesting experiment about user preferences when clicking on the Google search results: the top link is clicked 25% of the time, while the 3rd link is clicked 7%. But if you move the first (the actual best) link to the 3rd position, it is clicked 12%.

Keynote: A Quest for Visual Intelligence (by Fei-Fei Li) Historical roadmap of computer vision. Cooper kitten experiment — vision is learned depending on the environment — therefore, an artificial vision system should be learned, not crafted. Human vision is very contextual — same unrecognizable blob can be categorized by a human once placed into a context. LSTM for caption generation. See dense captioning paper for the current state of caption generation. There is a new dataset [!]: www.visualgenome.org to investigate image and language models. Object localization and categorization in real time on a video stream.

Based on LDA, but adds time (topic drift) into the picture. You can see how topic-specific words change over the time.

A motivational talk about large graphs and the kind of knowledge that can be extracted from them.

The workshop was planned to be in an unusual format: the organizers posed a question and invited speakers prepared 20-minute talks. However it seemed that the speakers still used the opportunity to talk on the workshop to speak mostly about their stuff.

Q1: What is deep learning in the small data regime?

Compared to the previous year the conference felt disoriented. Last year (ICML’15 in Lille) the fascination by the deep learning was almost palpable — novel ideas, novel applications, visionary panels and discussions, all that gave the feeling “look, this deep learning stuff is really something!”, also the other trends, like bayesian optimization, gaussian processes and few more were strong and inspiring. But that was last year. This time half of the talks seemed to go along the “we all know that deep learning is cool, let’s apply it to the problem X… just because why not…” line. Is it because all the fresh stuff was presented at ICLR?…

Of course that does not apply to every talk — as you’ve seen there were remarkable and interesting presentations as well. The overall trending topics seemed to be: