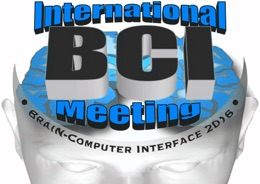 I had two personal goals for attending BCI Meeting 2016:

Disclaimer: this post contains mostly the observations that are important to me and does not present full overview of the conference. All of the observations, comments and conclusions are biased by my personal research interests and goals. The notes under the presentation and posters below might not reflect the content of the presentation, but rather the thoughts I had while listening.

Talked with Jon Wolpaw and confirmed that the idea to fix accuracy at 99.9% and work on reducing data transfer time makes sense and might be a viable path towards more reliable BCIs.

Actual users of BCI talked about their experiences and hopes.

From these presentations I got the feeling that machine learning has achieved the level, where usable tools are available to non-specialists. This means that the role of a machine learning scientist is now shifting back from helping scientists in other areas to basic theoretical research.

Is there any future for BCI systems where a random mental activity is associated with an action? Probably not, because such systems do not allow for continuous input (to perform an action with varying intensity) and the activity the user should perform is not intuitive (thinking about apples to move the cursor to the left). Thus it seems that an abstract mental state classification is not useful for control in BCI. Might still make sense in other areas of BCI, such as mental state exploration and general neuroscience/psychology research.

I was too busy presenting my own work and had little time to look at other posters. My poster elicited lots of interest and lots of positive feedback. The end goal would be to find an intracranial lab where I would be able to try my real-time system on patients with implanted electrodes.

The workshop was about implantable devices and associated research. Bunch of implantable devices presented. One was portable and coupled with a tablet, another was presented as a multiple-purpose general implantable solution for BCI or Parkinson’s. W-HERBS: 128ch ECoG in development, subdural placement, goal is to control a robotic hand. CLINATEC, CEA Biomedical Research Center, France presented their ECoG implant that replaces part of the scull. The next stage for them is to use it to control an exoskeleton.

They’ve built the “Neurochip” device, that reads the signal, processes it and can provide electrical stimulation. Can be used for:

Future plans include tracking changes in plasticity, [!] simulate an artificial neural network and connect it with biological neural network via those loop connections. [!] Sci-fi prognosis is that brain could learn to use computational possibilities on a chip.

Dedicated to the search of other P300-like signals, that reflect some inner workings on the brain.

The area of decoding in implanted devices heavily relies on machine learning methods like ReFIT, Kalman Filters and even HMM and Neural Nets were mentioned. The most impressive system that was demonstrated enabled the user to operate an Android tablet using a coursor movements + “click” command. The device is one Utah array. I was impressed by the speed of performance — I would say that the patient was able to operate the device only 3 times slower than I do (of course large part of it comes from limited capabilities of android input methods, making it perfect for coursor + click way of operating it).